In 1986 the author, a playwright and critic who had left New York a decade earlier and had been working as a harpsichord maker, fell into a job in the Press Office of New York City Mayor Edward I. Koch, who had been elected to a third term in a landslide. As an Assistant Press Secretary he was immediately caught up in the circus of big-city politics. A colorful, vivacious, relatable politician, Koch proved an amiable, decisive boss, and the job was often fun. The Press Office gave the writer a close-up, inside view of municipal government in action. He often accompanied the Mayor, sometimes by helicopter, to high-visibility events. Striding into hotel ballrooms and marching in major parades, Koch greeted the public with an ebullient double thumbs-up, crying, “Here I am! It’s me!” At work in his office and at community meetings, the Mayor engaged the minutiae of municipal service with focused attention. But many of the city’s problem were intractable, and it was a difficult time for Koch, whose reputation and confidence were eroded by a series of scandals, among them the prolonged and messy fall of Bess Myerson, former Miss America and Koch’s Commissioner of Cultural Affairs. The author struggled to make sense of it, from the serious to the ridiculous. His account offers a unique perspective, both intimate and detached, on how the great city really works.

With Koch is available by mail-order direct from the publisher, Fast Books, P.O. Box 1268, Silverton, OR 97381. Please add $4 for packaging and postage. 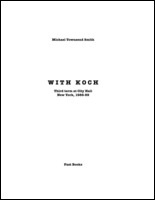